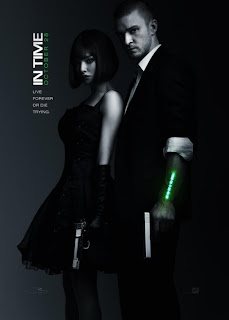 I cannot express how much rage I have for this movie. Before that, let me wish all my Indian friends as well those around the world a merry Deepavali, may you have lotsa murukus and mutton curry.

My expectation for this movie thought it was gonna be a good sci-fi flick. It was a total let down, with corny acting by Justin Timberlake and Amanda Seyfried. Movie started off with people trying to live their lives within their giving time. Their digital clock on their left arm starts ticking when they hit puberty (age 25) which they don't aged from then on till their clock runs out of time.

The whole movie is does not give you a plot, well it does but very much like the classic robin hood type of heist where both of the main cast robs from the rich and gives to the poor and of course their currency was:- time. The whole plot of the story was very straight forward about catching fugitive with out any twisting mind blowing sense of direction. Seem like the director just wants to focus on the main story about the power of time and how the rich remain so called immortal and where the poor dies due to out of time or like what the movie called it "Timed out"

Pretty much my last paragraph sums up the plot of the story where they keep doing it after robbing from one of the main cast's rich tycoon dad. Seriously, this movie does not make any sense. I thought they would at least explain how they was giving such genetic modification to giving them those digital clocks on their skin. Sadly that left us viewers hanging.

Not even Olivia Wilde's death in the movie can save it, (so little screen time for her) I wished the director should had let her be the heroine instead of a side cast which timed out.

Lets keep this sort, since elaborating this movie review keeps me on the edge of raging more.

Summary:- If you have extra change to waste, please do not waste it on this movie instead get a nice Starbucks drink instead. 3/10 is my verdict for this movie. Never in my entire life that I watched a nonsense movie.
#subMovie fail justin timberlake movie movie review