on January 10, 2014
This week offering for a mere USD 6 for 5 awesome titles by FROZENBYTE. 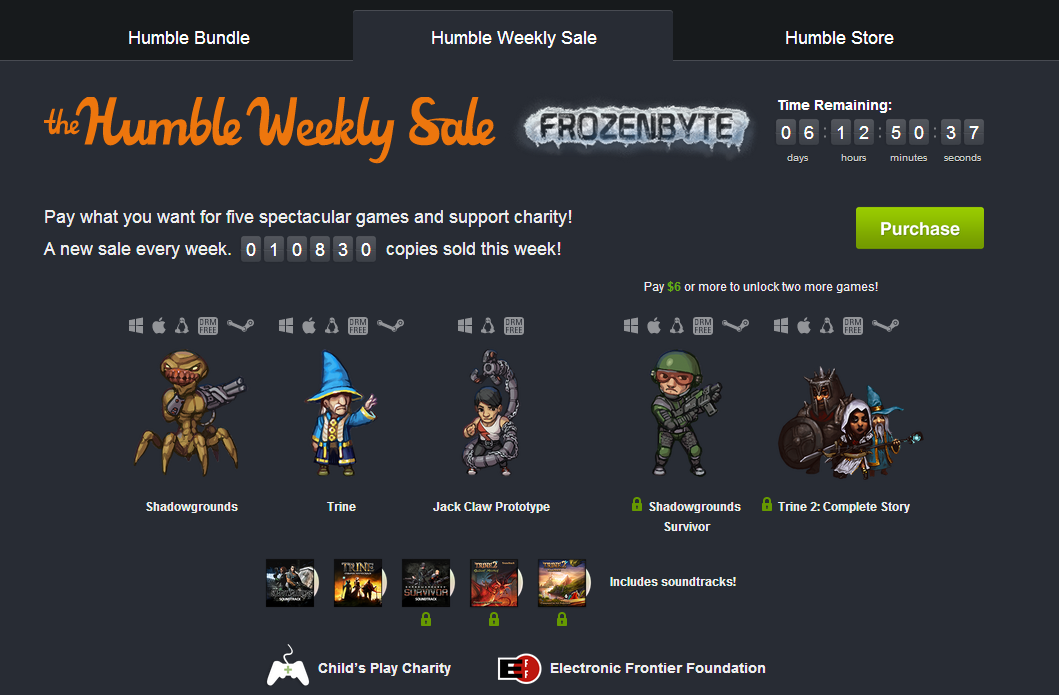 
Shadowgrounds is the impressive, top-down action-shooter fromFrozenbyte. Enter a research facility infiltrated and overrun by colonies of aliens, growing more fierce by the second. Armed with a devastating arsenal of military-grade weapons, it's up to you take down these beastly creatures and reclaim the facility. The adrenaline-pumping, top-down gameplay and audiovisual fireworks set the scene for this new action experience which can be played single-player and co-op.

Enter the magical fantasy world of Trine, where you'll create and use physics-based objects to solve crafty puzzles and outsmart unruly enemies. Three heroes are on a mission, guided by a mysterious device called the trine, to save their kingdom from the grips of evil. Boasting intricately woven scenery and a fantastical world makesTrine the perfect game for players at all levels. The highly-acclaimedTrine won Gaming Nexus' "Game of the Year" award in 2009.

Jack Claw is a prototype game developed by Frozenbyte. Although it is an unfinished project, Frozenbyte is also including the editor, assets and source code in the Humble Weekly Sale. Experiment with the amazing extended claw by swinging objects around and generating mayhem!

Shadowgrounds Survivor is the sequel to the intensive and fast-paced shooter Shadowgrounds and turns up the action with three playable characters and the introduction of RPG elements. Stranded on Jupiter's moon and overwhelmed by the alien hordes inhabiting the surface, you must shoot your way out if you hope to escape alive. Shadowgrounds Survivor features the same high-tech weaponry, but with added features like a sentry turret and napalm flame, so you can kill these ghastly aliens in style.

Immerse yourself in brilliantly rich graphics and a wondrous magical world in this side-scrolling action-puzzle platformer. You’ll need to make use of a wizard, a thief and a knight and their unique abilities in order to complete puzzles and defeat enemies in Trine 2: Complete Story. Play by yourself and toggle between all three characters, or play with up to two other friends in co-op mode.

all includes soundtrack as well! so hurry get em before they are gone @ https://www.humblebundle.com/weekly