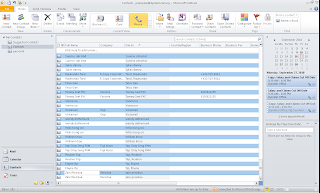 Well what a relief anyway, after a long struggle of getting a new exchange 2010 server up. About a week of deployment, outlook connectivity with Exchange 2010 Standard from the disc provided by the Microsoft Action Pack Subscription keeps on telling me my newly deployed exchange 2010 is still in maintenance mode and contact the administrator. So I lurk around, and found there is another installer called Exchange 2010 SP 1. I gave it a whirl on a hyper-v and it worked FLAWLESSLY right after getting crap load of KB hot fixes from Microsoft.