Greetings my fellow lurkers, seems I've been caught up with work and many excitements in life. Anyway back to blogging the living crap of of my life. I'll post up some of my review of the many big screen movies I've watched and the games that I recently purchased.

Firstly, with out further a due yesterday I get to watch the movie Real Steel.

The build up the story unfolds when Charlie Kenton founds out that his long lost 10 years GF had kicked the bucket, leaving him with a son that is 9 to 10 years old. 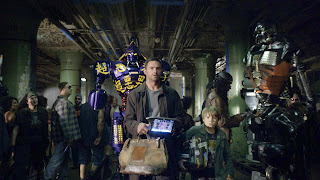 Anyway the character that Hugh Jackman is playing a no good, hard headed father which doesn't much care much for the well being of his son. He still shows some affection when he did gave his son a burrito. ( I like how movies give out small hints to think about the relationship between father and son as the movie unfolds) 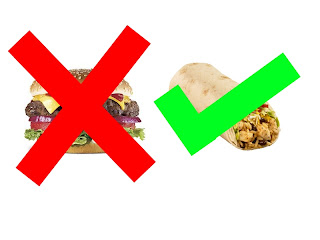 I won't give spoilers for the movie too much. But it's been awhile where movies took me for a ride of my time. My expectation for this movie was supposed to be an all out gruesome machine battle royale, however it was not the case. For me, I personally dived into both father and son role in the movie and thought it was pretty late for a good movie which should be launched for Father's day occasion. 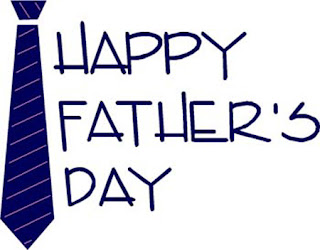 The fight scenes really caught me to my cinema chairs with a well good display of CGI effects adding up with the raw sheer sound of metallic punches. Pretty impressed with the overall presentation. 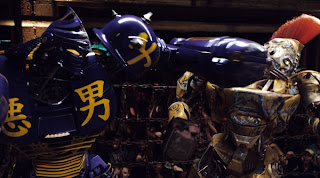 As for story wise, it's like daddy trying to work his way back from its debt while handling his kid for a duration of time before his foster parents come back from a cool holiday trip. Of course there is money involved. Charlie worked his way up from failures and finally work together with his 9 to 10 year old kid in mini arena fights which then leads em to WRB league Robot together with a robot that his kid found in a scrap metal yard. (Max Kenton: I said I'm 11!! ) . 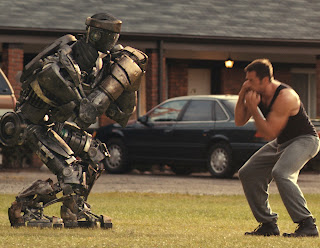 But the whole story actually develops between father and son relationship. Thus saying the robot, A.T.OM. was actually a shadow image of Charlie life if viewers can think of it that way, then the whole movie would be more meaningful. I must say, the director is very brilliant if making me think of it that way since it was excellent subliminal message of feeling that the robot was actually Charlie's past life and the life that it is going to be.

As for the finale scene, it was a very realistic good ending with some emotional moments with nice camera panning between the son and his dad. 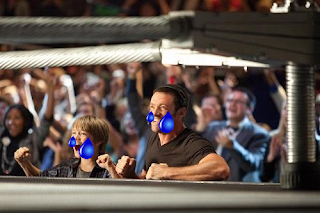 Also not to forget, there will be an upcoming sequel for Real Steel, and this might be on my to-watch-list. And I notice they heavily or purposely adding ADS for major companies in a few scene. Probably marketing strategy or maybe co-sponsor for the Robot parts and communication gizmo which is in the movie.

Summary: I would recommend people watching this movie, but not your average B-grade movie where you just munch on popcorn and straight up plot. There are a few hidden agenda of a movie which pretty much touched me. As a verdict i would rate this movie a 8/10

P/S: not to forget the game which is on both xbox live and PSN.. it didn't quite attract me tho since I was hoping for it to be cell-shaded but unfortunately not.