Manage to grab this screening to watch my man, Mr. Jackie Chan. Well, well firstly he did mention of retiring from action movies since his last movie, Chinese Zodiac 2013. However you know, we still love this 59 action kicking Chinese actor.

Do note this is a spin-off from the other police story movies where it tells a story of a police dad seeking her daughter in a town in China for reconciliation after a fiasco during his wife death at a hospital.

The scene start with a dramatic preview of the ending where Jackie is pulling a trigger of a gun to his head. Shocker right? spoiler at the beginning of the show. Well you be the judge after watching it to clearly understand why he did it so. Another shocker was , Jackie has a new hair cut! Probably to fit in as a China policemen criteria.

Surprisingly, the action in this movie has been considered milder compare to the previous installment of the franchise. However there is more of a darker feel towards the whole movie as well as the seriousness of dialog between antagonist and protagonist can be felt through out of the movie.

Most of the actors are from mainland China, therefore I've heard from a friend that they were pretty famous over there. As for some of their acting skills, certain times the fluidity of their character actions doesn't present well on the big screen. 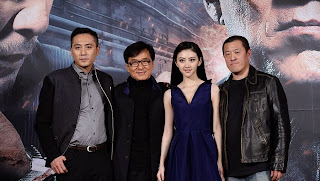 All in all, I do like the moral of the story towards the end, where is all about past regrets which may not be fixed but to be a lesson learned. A bit of cheesy plot twisting as well but this might not be Jackie's best movie of the year but then again a more serious side from him on the big screen which is a plus side.

I would give this movie a 7/10 but for movie goers , I would recommend this as a rental instead to watch at home since the movie ticket price now of days is so bloody expensive lately!